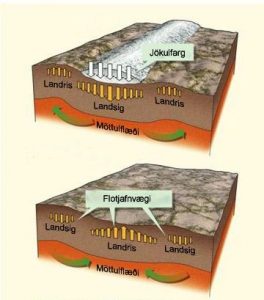 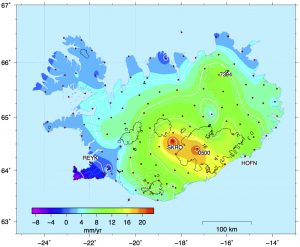 As glaciers grow and advance the ice loading causes crustal depression displacing the mantle below the ice, forming a crustal bulge beyond the ice cap. With the crustal depression sea levels move higher and coastlines and shells can be found many meters above sea level since the last glacier period During the Little Ice Age Icelandic glaciers grew causing crustal depression. As the glaciers retreated and thinned again during the 20th century the underlying crust rebounds at an accelerated rate. Vatnajökull glaciers weight is approximately 3000 million tons and since the ending of 19th century (Little Ice Age peak) the glacier has lost about 10% of its volume.

Satellite data and GPS measurements have revealed the pattern of uplift around the periphery of the Icelandic ice caps. The rate of uplift is highest closest to the margin and on nunataks where the greatest mass loss takes place. High-resolution GPS measurements have shown extensive uplift around Iceland’s main glaciers and the central highlands which is associated with the crusts isostasy. The highest peak in Iceland, Hvannadalshnúkur in Öræfajökull is rising as is the land south of the ice cap. The uplift is especially evident in the shallow fjords, marshes and wetlands around Höfn in Hornafjörður.

GPS measurements devices are located all around the ice cap, but also on Grímsfjall and temporary on nunataks and mountains during scientific expeditions of the Earth Science Institute of the University of Iceland and the Icelandic Meteorological Office. Vertical and horizontal movements have been recorded, and on average the horizontal displacement is 3-4 mm per year, but the uplift is very variable, depending on location. Measurements indicate an uplift rate of 40 mm per year at Jökulheimar at the western margin of the ice cap, compared to 15 mm per year at Höfn in Hornafjörður, southeast of the glacier. If the ice cap would melt completely, uplift would be approximately 100 m at the centre of the ice cap and 50 m at the margin over a longer period of time.

The National Land Survey of Iceland has since 1998 measured uplift at Hornafjörður. The GPS station is located at Fjárhúsahóll, at the edge of the town of in Höfn. This is the longest continuous GPS survey  of uplift and horizontal movements in Iceland and the data is published in real-time at the following website: http://brunnur.vedur.is/pub/gps/timeseries/HOFN-plate-full.png .

The removal of the ice load as the glaciers retreat can lead to enhanced magma generation and increased volcanic activity and there are some indications that these effects are already causing increased volcanic unrest. The effect can thus be seen in increased activity in Grímsvötn, Bárðabunga, Öræfajökull and Kverkfjöll in Vatnajökull glacier.

This increases the risk of jökulhlaups (e. glacial outburst flood) to the south, west and north, threatening settlements and infrastructure.

These landscape changes have been evident to the residents of Hornafjörður municipality for years. The future of shipping through the inlet of Hornafjarðarós is uncertain due to the rapid uplift in this area. However, rising sea level due to warming climate and melting glaciers counteracts that process to some degree.

Evidence of uplift in the area in recent decades are e.g. the following:

Uplift at Hornafjörður from 1998–2017 measured by GPS devices in mm.Source:http://brunnur.vedur.is/pub/gps/timeseries/HOFN-plate-full.png.