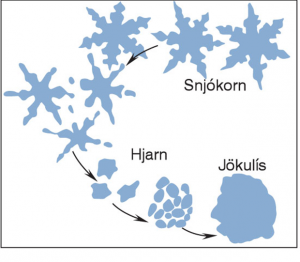 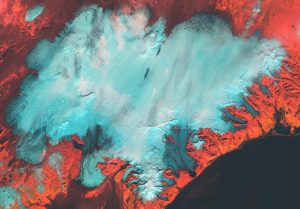 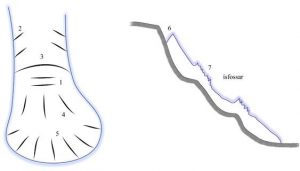 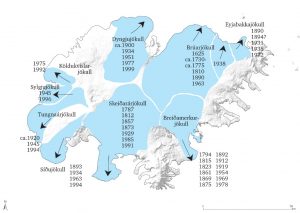 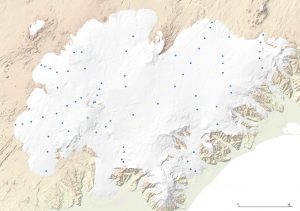 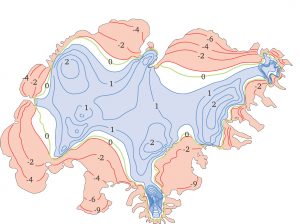 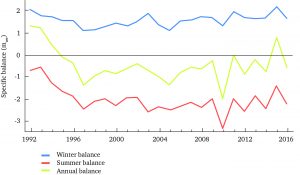 Glaciers form where more snow accumulates over the year than melts during summer. As layers of snow accumulate, the buried snow grains become more and more tightly packed and are converted to firn, which subsequently metamorphoses to glacial ice. This process takes place in the accumulation zone at the higher altitudes. Air becomes trapped in bubbles within the ice. At that point the snow has transformed into glacier ice, which has a density of approximately 900 kg/m3. For Icelandic glaciers, this process only takes about 5–6 years at a depth of 20–30 m. However, in the polar regions, this process takes up to 100 years and occurs at a depth of 60–100 m. Ice crystals grow as they travel down glacier and can reach the size of a person’s head at the termini of some Icelandic outlet glaciers.  However, in Antarctica the ice crystals can become one meter in diameter, as the ice is thousand times older than in Icelandic glaciers. 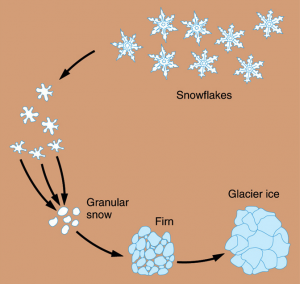 Landsat satellite image from autumn of 1994 of Vatnajökull ice cap. The location of the snowline is visible, separating the snowy accumulation area and the barren darker ablation area. Source: https://landsat.usgs.gov/

Cross section of a glacier showing the accumulation and ablation areas, snowline or equilibrium line, and flowlines.

The thick mass of ice deforms under its own weight in the accumulation area and flows downstream like dough or molten metal. The ice flows downhill towards the ablation zone where higher temperatures intensify the melting of snow and ice and melting exceeds the accumulation of snow over the year. Crevasses form in the surface of the glacier as it flows over an uneven bed or are dragged along the sides of mountains. Outlet glaciers are typically heavily crevassed, the upper part of the glacier is brittle and when changes in velocity occur, extensional forces cause the ice to fracture.

A typical outlet glacier. The ice deforms under its own weight and flows from the accumulation zone to the ablation zone like a dough. Crevasses form when the glacier flows over an uneven bed or is dragged along the sides of mountains. Source: modified by Hannesdóttir and Baldursson, 2017.

The ice velocity is dependent on the temperature of the ice, the slope of the bed, and even the weather, as increase in ice velocities have been measured during heavy rainfall. The larger outlet glaciers flow approximately 1 m/day, as monitored by GPS and satellite data. Some of the outlet glaciers of Vatnajökull surge. Then the glacier suddenly flows faster, and the snout can advance some hundreds of meters in a few months. Water is distributed at the base of the glacier and lifts it slightly, such that the flow is increased approximately hundred times. Most surge type glaciers are relatively flat (between 1.5° and 4°) and move too slowly to keep up with the snow accumulation in the accumulation area. In order to keep regain their equilibrium, they surge. Surge-type glaciers cover 75% of the surface area of Vatnajökull and many of them surge regularly. However, no surges have been recorded since the 1990s.

Variations in glacier mass balance often give reliable indications of changes in climate. The mass balance is positive if the glacier gains more than it loses. The accumulation of snow is measured in the spring by drilling cores through the winter snowpack and the ablation of snow and ice by measuring changes in the height of the stakes left in the boreholes or drilled into the glacier ice. In general, snow accumulates during winter and snow and ice are removed by ablation during the summer months. However, snow may accumulate during summer at high elevations and ablation may win over accumulation during winter at low elevations.

The location of mass balance meausrements sites of the Institute of Earth Sciences at the University of Iceland (left), and the mass balance of the ice cap during the glaciological year 2015-2016. Source: Pálsson et al., 2016.

Annual, winter and summer mass balance of Vatnajökull since the start of the measurement series. Source: Pálsson et al., 2016.

The response of glaciers to climate change depends on their size and shape, but most of them react to a change in mass balance within a few years by adjusting the position of their snout. The glacier will then continue to retreat or advance for many years or decades before completely adjusting to a change in climate. Short and steep valley glaciers adjust in a decade or two, but larger and less steep glaciers have a much longer respond time.