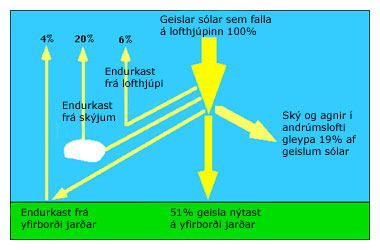 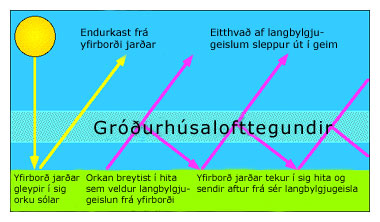 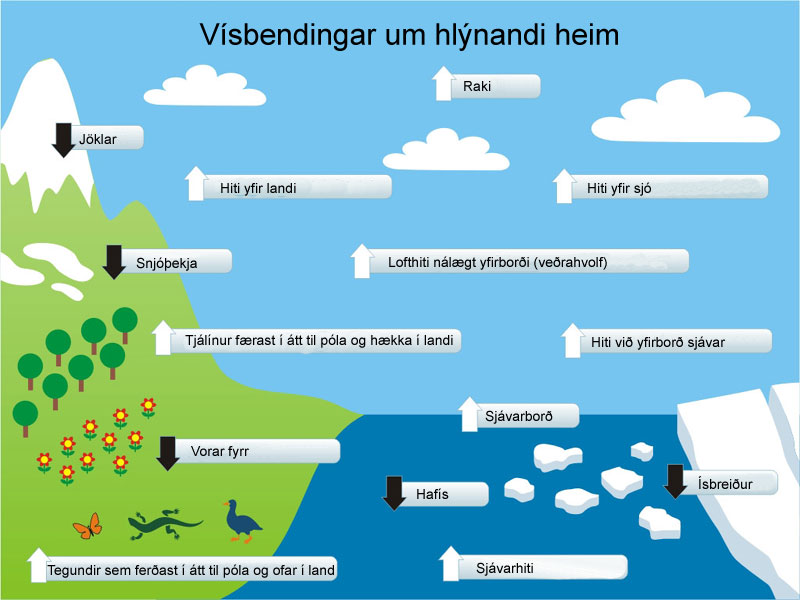 Since the industrial revolution, late in the 18th century, massive changes in human activities have led to greatly increased emissions of carbon dioxide (CO2) and other so-called greenhouse gases (GHGs) into the atmosphere. This is the main cause of the current observed global warming. The rapid increase in the concentration of CO2 and other GHGs in the atmosphere, on the other hand, is due to combustion of fossil fuels, such as coal and oil, in electric power plants, transportation and industry and a decrease in the uptake of carbon dioxide, mainly due to deforestation, soil erosion, agriculture and expanding cities.

Earth’s climate is largely determined by the planet’s energy budget, i.e. the balance of incoming short-wave radiation from the Sun and the outgoing long-wave radiation of the Earth back into outer space. The atmosphere absorbs a small portion of the suns incoming warming rays, a larger portion is reflected by the atmosphere and cloud coverage but approximately half of the incoming solar radiation reaches the Earth and warms its surface.

The nature of GHGs in the atmosphere has been known for decades. Both the Sun and the Earth emit electromagnetic rays. GHGs in the atmosphere allow the majority of the high energy radiation (short-wave radiation) from the Sun to easily pass through and reach the Earth’s surface – fortunately though the ozone layer (O3) blocks most of the harmful ultraviolet rays from reaching the surface. The Earth warms up as a result of the incoming radiation and reflects heat rays (long-wave infrared rays) back into the atmosphere. However, the atmosphere prevents this infrared radiation to pass through into space, but rather absorbs them or reflects back to Earth, thus functioning like a blanket. Hence, the mean temperature of the Earth is at present around 15°C, not -18°C as it would be without the atmosphere.

Many greenhouse gases, such as carbon dioxide, methane, water vapor, and nitrous oxide, occur naturally while others are synthetic. However, humans are altering their balance and especially the concentration of CO2 through interference with the carbon cycle (burning forests, mining and burning coal). These activities artificially remove carbon from solid storage and convert it into its gaseous state, thereby increasing atmospheric concentrations of CO2. As a result, they are higher now than ever during the last 650.000 years according to scientific studies on ice cores from Antarctica.

Atmospheric gases absorb long-wave radiation very strongly. This causes a warming of planetary surfaces by a process called the greenhouse effect. The greenhouse effect is said to “trap heat” like a blanket making the planet’s surface warmer than it would be without it. The yellow arrows refer to solar (shortwave) radiation and pink arrows refer to terrestrial (long-wave) radiation. Source: laulima.hawaii.edu.

The fifth scientific report of the Intergovernmental Panel on Climate Change (IPCC) of the United Nations was published in 2014. IPCC’s reports are based upon research of thousands of scientists and are the most comprehensive syntheses about climate change ever compiled. The results of the latest report confirmed and strengthened the findings of the 4th IPCC report from 2007, which marked a turning point in the world debate on climate change. Ever since, the vast majority of climate scientists have recognised it as a fact that the current global warming is mainly due to anthropogenic emissions of CO2.

Natural climate fluctuations are well known in geological history. The glacial periods of the Ice Age that began some 2.7 million years ago have been punctuated repeatedly by interglacial periods of warmer global average temperature, lasting thousands of years. Changes in the earth’s orbit and the tilt of its axis cause systematic variations in the amount and distribution of solar radiation. Cyclical variations in three elements of earth-sun geometry combine to produce these variations:

The difference in globally averaged temperatures between glacials and interglacials is about 5°C. The current Holocene interglacial began at the end of the Pleistocene, about 11,700 years ago. Indicators of past climate can be found within the stratum of the ancient ice sheets in Greenland and Antarctica that preserve information about the chemical composition of the atmosphere and the air temperature during its formation. Sedimentary layers on the bottom of the ocean also preserve details of the climate history of the Earth.

Solar energy reaching the Earth began to increase some 18.000 years ago and reached a maximum 9000 years ago. This increasing solar energy warmed up the atmosphere and the oceans and marked the end of the last glacial period. Approximately 5000 to 7000 years ago average temperatures where higher in the northern hemisphere than ever during the Holocene, due to a change in the Earth´s orbital eccentricity and obliquity, a period called the Holocene Thermal Maximum. Some 3000 years ago, the climate cooled again, and glaciers started to form on the highest mountains in Iceland, called the Neoglacial period. In addition to amount of solar radiation changing over tens of thousands of years, there are also seasonal and annual anomalies in climate, especially due to variations in atmospheric and ocean currents.

Although, similar temperatures as today are acknowledged during earlier interglacial periods, scientists believe that the current warming has occurred ten times faster than the median rate of earlier warming periods before and that the rate of warming is getting even faster during the last two decades. Global surface temperatures increased by 0.8°C on average during the 20th century and considerably more in the Arctic and in sub-polar areas. This rapid warming is traced to increased anthropogenic GHG emissions. The temperature increase in Iceland during the same time period is close to 1.5°C.

The above mentioned numbers do not appear high considering day-to-day or seasonal temperature fluctuations, but as a change in global mean annual temperature it has substantial consequences, resulting in sea-ice and glacier melting, rising sea levels, increased vegetation growth and changes in migratory routes of birds and animals. The year 2016 was the warmest on record since the beginning of measurements, and 2017 was the second warmest year on record. 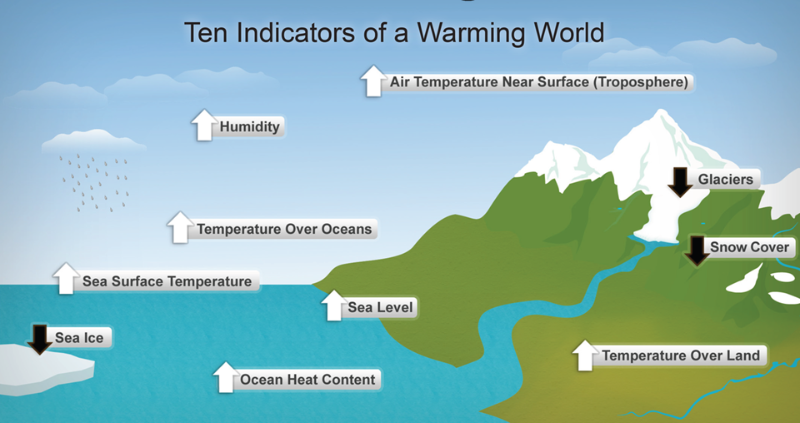 Ten key climate indicators that all point to a warming world. Source: http://cpo.noaa.gov/warmingworld

The burning of fossil fuels is estimated to have contributed to a 78% increase, above natural levels, in CO2 emissions between 1970 and 2010.  Approximately 40% of this “extra” CO2 is still circulating in the atmosphere, while the oceans have absorbed approximately 30%, and vegetation and soil have bound some 30%. Obviously, increasing concentrations of GHGs upset the natural balance in the atmosphere and as a result the IPCC forecasts a warming of 0.3-4.8°C over the next 100 years depending on different scenarios of human behaviour and efforts put into reducing emissions and implementing countermeasures.

Sigríður P. Friðriksdóttir: The evolution of life and earth. Flensborg 1999.