Glaciers and glacial rivers reshape the landscape in many ways. The ice itself is too soft to erode the bedrock, but rocks and gravel embedded in the ice carve the bed, creating so-called glacial striations. Glacial debris is carried on top of the glacier, within the ice, and at the interface of the bed and ice. The debris is finally deposited at the margin of the glacier as moraines. Outlet glaciers can erode over-deepened troughs, and as they retreat, water accumulates in the depressions evacuated by the ice, and glacial lakes form. Landscapes are ever changing in the vicinity of glaciers and in the last one or two decades, enormous changes have been observed. New lakes form, the glaciers deposit huge amounts of material, rivers change their course etc. All around the periphery of Vatnajökull ice cap are textbook examples of glacial geomorphological processes and landforms and the outlet glaciers of Vatnajökull have been central to the study of these landforms and processes. As the glaciers retreat freshly deposit­ed features and landforms are uncovered that are easily accessible for study and repeat measurements. 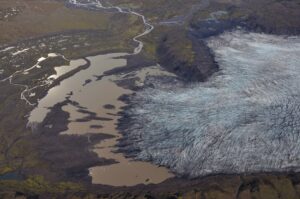 Extensive mapping of the forelands of receding glacier snouts have been carried out in the last few decades by several research teams. 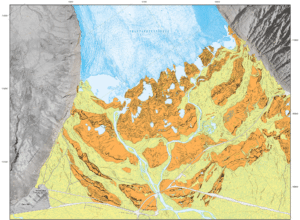 Advancing glaciers may override vegetated land and destroy habitats of many species. Glacial rivers form sinuous branches and intricate braided patterns in flat areas because sedimentation of suspended material raises the riverbed and leads to frequent changes in the river path. Due to ever changing landscapes at glacier margins, rivers can easily change their course, leaving dry riverbeds and old bridges that have outlived their use. There is for example almost no water running underneath the longest bridge in Iceland, over the Skeiðará river, as most of the river changed course into Gígjukvísl in 2009. A new, shorter bridge opened in the fall of 2017. 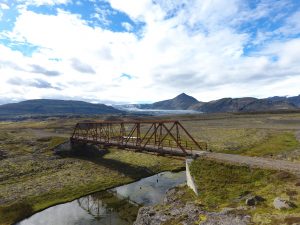 In the 1940s a bridge was built over river Heinabergsvötn, but shortly after the river changed course, and merged with river Kolgríma. Photo: Snævarr Guðmundsson.

When the first settlers came to Iceland, the glaciers were much smaller than today. The glaciers advanced significantly during the Little Ice Age (ca. 1450–1900). In the 17th and 18th centuries, the southeast outlet glaciers of Vatnajökull reached far out onto the lowlands. They retreated slightly during the first decades of the 19th century and then re-advanced. Around 1890 nearly all of Vatnajökull’s outlet glaciers had reached their maximum size in historical times.

A few historical mountain routes between farms and settlements became impassable during the Little Ice Age, due to advancing glaciers. One of those routes, the so-called Norðlingavegur from Fljótsdalur to Lón, was named after farmers who lived on the north side of the ice cap but travelled to the southeast coast to fish. Prior to 1700, there is also thought to have been a route between Morsárdalur valley south of the ice cap to Möðrudalur á Fjöllum in the northern highlands.

Annual mean temperatures in Iceland for the last 1100 years. The Little Ice Age (ca. 1450– 1900) is clearly indicated. Iceland enjoyed a warm climate in the first centuries after settlement (870–1262) and again during the last century or so (1918–2017). Orange line, temperature proxies based on oxygen isotopes in ice cores from the Greenland ice sheet. Blue line, estimate from Þórarinsson (1974). Modified after Björnsson (2017) and published in Baldursson et al., 2018.

The southeast outlet glaciers of Vatnajökull are in the warmest and wettest area in Iceland and respond quickly to changes in temperature and precipitation. Hence the area provides unique opportunities for research on the relationship between glacier and climate change. Their former size has been traced from well-preserved glacial moraines and from descriptions in written historical accounts. The local accounts and writings of naturalists and travellers also provide valuable information about the extent of the glaciers. Descriptions of damaged pastures, hayfields and houses due to glacial rivers and advancing glaciers, along with difficult access to grazing areas are prominent in the written records. By using maps from the early 20th century and onwards along with aerial and satellite images, lidar measurements, and GPS measurements the surface of the glacier has been reconstructed at various times and areal, elevation and volume changes estimated.

After 1890 most southeast outlet glaciers of Vatnajökull started retreating. They receded fast in the 1930s–1940s and continued retreating, albeit more slowly, until the 1960s. During the 1970s and 1990s, the glacier retreat slowed further or stopped and some of the glaciers even advanced. From 1995, the glacier retreat has been exceptionally fast. Research indicates that glacier variations since the 1930s are mostly related to changes in temperature, since long-term variations in precipitation during this period are negligible. 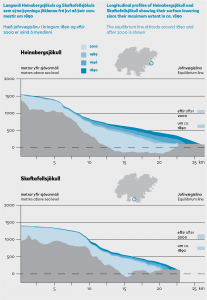 Longitudinal profiles of Heinabergsjökull and Skaftafellsjökull, showing their retreat and thinning since their maximum size around 1890. Source: Hannesdóttir et al., 2015, modified by Hannesdóttir and Baldursson, 2017.

Since the end of the Little Ice Age, the glaciers have retreated 1–8 km depending on location. They have also undergone significant surface lowering, amounting up to 300 m at their snouts; this equals to approximately four towers of the famous Hallgrímskirkja in Reykjavík. 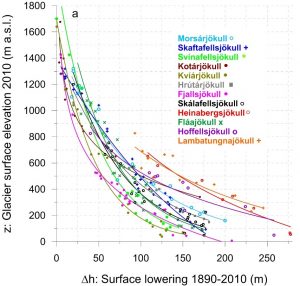 Surface lowering of a few outlet glaciers in southeast Iceland, during the time period 1890-2010. It is evident that at higher elevations, surface lowering is negligible, but close to the terminus the lowering is close to 250 m. Source: Hannesdóttir et al., 2015. 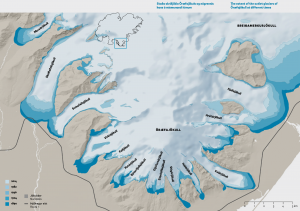 The southeast glaciers have since the end of the 19th century shrunk by some 300 km2; Breiðamerkurjökull alone has withered by 115 km2. For comparison, the Reykjavík capital region covers an area of 275 km2 and the small peninsula of Höfn in Hornafjörður is only ca. 4 km2. The ice volume lost since the end of the Little Ice Age, calculated from maps of the surface lowering and the reduction in area of the glaciers, amounts to 130 km3, which is equal to 13 billion truckloads of ice (given that each truck holds 10 m3). Individual outlet glaciers have lost 15–50% of the ice volume during the same period. The actual loss depends on the size of their accumulation area, bed slope and whether they terminate in a glacial lake. Since the year 2000 the glaciers have retreated extremely fast, and their mass loss per unit area is among the highest in the world.

Left: Reconstructed surface geometry of Skálafellsjökull, Heinabergsjökull and Fláajökull around 1890, based on glacial geomorphological data, and oldest maps. Right: The same glaciers in 2010, based on lidar DEM. Source: Hrafnhildur Hannesdóttir, unpublished data.

To put the changes of the southeast outlet glaciers into context, the Greenland Ice Sheet has in recent years annually lost double the amount of ice that these glaciers have lost in 120 years (1890–2010). The total ice volume loss of the southeast outlets corresponds to a 0.33 mm rise in global sea level, while melting of the polar ice sheets (Greenland and Antarctica) contributes to 3–4 mm rise in sea level, annually, whereof only some 20%, or 0.6–0.8 mm, are attributed to melting of the Greenland Ice Sheet. 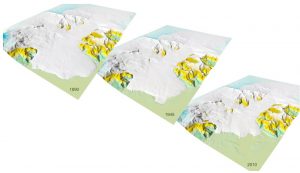 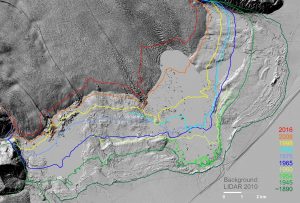 The retreat of Breiðamerkurjökull and growth of the Jökulsárlón glacial lake over the last century. The 3-D topography is based on lidar measurements from 2010. Image: Glaciology Group, Institute of Earth Sciences, University of Iceland.

Breiðamerkurjökull outlet glacier reached its maximum in 1890. At that time, when the glacier snout was only 250 m away from the shore, people worried that it would extend to the sea and close the main route connecting southeast and south Iceland. Instead, however, the terminus began to retreat, and a glacial lake began to form in 1934–1935. In 2015, the Jökulsárlón glacial lagoon had grown to become 8 km long and the deepest lake in Iceland, 248 m. The lagoon is really the mouth of a 200–300 m deep and 25 km long trough that the glacier has carved out. It is renowned for its beauty and one of the most popular tourist destinations in the country. 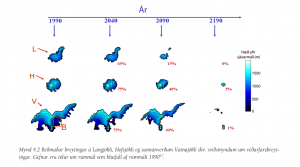 Response of Langjökull (L), Hofsjökull (H) and southern Vatnajökull (V) to the CE/VO-climate change scenarios. The volume numbers in red are the percentage of the ice volume in 1990. Source: Tómas Jóhannesson et al., 2007.

The subglacial topography is known from radio-echo sounding measurements of the Institute of Earth Sciences at the University of Iceland, which began in the 1950s and are still ongoing. These measurements have “lifted” the ice cap and uncovered previously unknown landscapes and formations, including some of the largest volcanoes in Iceland.

Perspective view from the southwest of the ice-capped Öræfajökull stratovolcano, showing the bedrock below the ice, including large depressions filled with lakes. From Eyjólfur Magnússon et al.  2012.

As the outlet glaciers retreat, glacial lagoons form in front of them. Initially several small pools form between the glacier moraine and the terminus but they soon merge into an elongated lake. The lake grows rapidly when the front of the glacier thins, floats up and breaks into pieces. In the end, a large lagoon may be formed, into which the glacier calves, i.e. ice chunks break off the glacier tongue, along a steep front. The glacial lagoons in front of Svínafellsjökull and Skaftafellsjökull in Öræfi, illustrate well the development of such lagoons.

Icebergs float around in the lagoons. About 90% of an iceberg is below the surface of the water. They are very unstable, and their random shape and non-uniform melting can cause them to tip or roll suddenly and people should not try to stand on them. Glacial ice is a mixture of ice, sand, gravel, ash and air bubbles, and the composition is clearly seen in the icebergs that break off the glacier snout. Sometimes smaller icebergs and chunks are carried out of the lagoons by glacial rivers and can be found scattered on the shore, as e.g. on the shore of Breiðamerkursandur south of Jökulsárlón. 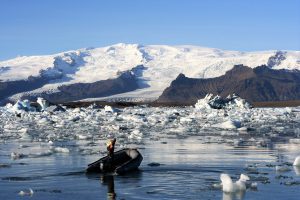 Glacial ice has a different colour from regular ice. It is blue because the dense ice of the glacier absorbs all colours of the spectrum except blue. If there are many air pockets in the ice, the bluish tone is not as prominent, making it appear whiter.

A number of landslides and rock avalanches have occurred in southeast Iceland. In spring 2007, a large rock avalanche descended onto the Morsárjökull glacier, leaving one fifth of the glacier buried. This is one of the largest rock avalanches to occur in Iceland during the last decades. The insulating effect of the deposit on the ice is evident and it moves along the glacier by some 80–90 cm per year. Undercutting of the mountain slope by glacial erosion and the retreat of the glacier are the main contributing factors for the rock avalanches, along with thawing permafrost and weaknesses in the bedrock. Landslides falling into glacial lakes may cause floods and thus pose hazard for people. 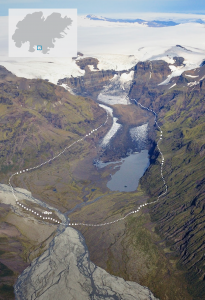 Glacier models indicate that after 200 years there will only be small ice caps on the highest mountains of Vatnajökull, i.e. on Öræfajökull and Bárðarbunga, and the highlands between Grímsvötn, Bárðarbunga and Kverkfjöll mountains. Vatnajökull could lose ca. 25% of its current volume within the next 50 years. Simultaneously, the runoff from the ice cap will increase and remain higher than today well into the 22nd century, until the ice reservoir has been substantially depleted.

Surface geometry of Skálafellsjökull, Heinabergsjökull and Fláajökull according to model calculations; top: if temperatures were 2°C higher than the average of the time period 1980-2000 (when most glaciers in Iceland were in balance, neither retreating nor advancing), bottom: 3°C higher than the average of 1980-2000. Source: unpublished data from Hrafnhildur Hannesdóttir.