Warming of the oceans

Warming of the ocean occurs mostly in the uppermost 70 m, which have warmed by approximately 0.11°C/decade since 1971. It is only last few decades that the warming has penetrated to depths below about 700 meters. The warming alters the physical properties of the ocean and reduces water mixing. Hence the oceans become more stratified. Nutrients, which are found mostly deep in the ocean or on the ocean floor, are less likely to move up to the surface where photosynthesis takes place. This reduction in upwelling and down welling makes it more difficult for water rich in nutrients, such as nitrate and phosphate, to reach the surface and for oxygen to reach the lower depths of the ocean. These kinds of reductions can result in biomass loss and changes in species compositions as species are differently affected. There are also indications that oceans organisms are migrating following their optimum temperature ranges. Blue whiting and mackerel, for instance, have now migrated to Icelandic waters and are now common species, whereas they were rarely seen a few decades ago.

The majority of thermal energy at the Earth’s surface is stored in the ocean. Solar energy maintains atmospheric and ocean circulation, wind-driven and ocean-current circulations move warm water toward the poles and colder water toward the equator. Air currents are dependent on temperature differences, density distribution, global wind patterns, rotation of the Earth and the depth and the shape of the ocean floor. Temperature and salinity changes caused by precipitation or evaporation lead to different densities of seawater, which are the primary drivers of sea currents such as the Gulf Stream. The Gulf Stream transports warm, salty ocean from the equator to the northern Atlantic Ocean, where the warmer water loses heat to the atmosphere and cools down. The cooler, denser water sinks and becomes deep seawater, returned back to southern regions by the Labrador Current. 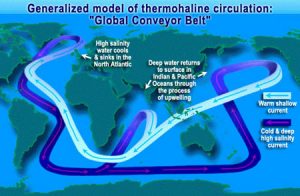